Australia Day is our official national day which marks the arrival of the first colonial settlers arriving on the first fleet in 1788. People celebrate the day through outdoor gatherings, BBQ, citizenship ceremonies and festivals. Australia Day for many marks a point in time when the English invaded Australia. It is also known as invasion day or survival day in mourning, celebration or recognition of aboriginal (first peoples) culture. 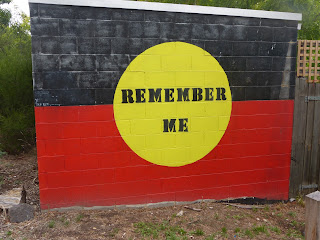 Australia Day is to many people a day of binge drinking and a show of "Aussie pride". Most people celebrate it without the faintest idea of what the day represents. What does Australia Day mean to you? Cronulla Riots in 2005 was the ugly side of Australia Day, extreme patriotism, the "fuck off we're full" attitude. People gathered at Cronulla for what was touted as "wog and leb bashing day" a shameful day. For those people who don't notice it or haven't experienced it "racism does exist in Australia" and has become more pronounced with the recent United Patriots Front and Reclaim Australia Groups. 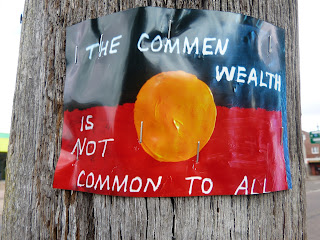 26th of January is an inappropriate day to mark a national holiday. It should be noted also wearing the Australian flag on your clothes, flying it on the car and even draping yourself in it is repulsive behavior. Why because there is nothing on the flag which represents the Australian identity. We should become a republic and use the republic day as the national day. Through this we can finally cut our ties with England and the royal family. Proper recognition will be given to Aboriginal people who still remain disadvantaged to this day (indigenous people make up 3% of the population but 25% of those in prisons, lower life expediencies, lower rates of education and employment and overall poorer health.) When Australia becomes a republic we shall think of a more appropriate inclusive flag and a new national anthem amongst many other changes to become more culturally inclusive. 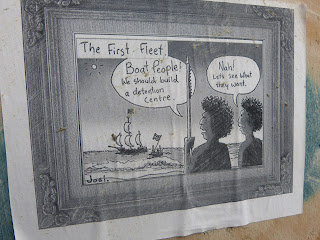 Posted by Australia Graffiti at 10:40