Nost has raised the bar and set a new benchmark in graffiti production. He's one of a select few who has developed a household name from an inconceivable dedication to the sub-culture. If anybody asks tell them that Nost painted Melbourne. Nost bombed and battered the walls of this city with paint. Nost challenged the legitimacy of street art capping works and replacing it with his art. He "took the power back" from government authorities and so called private land holders. His art was there to be seen, some of it rushed and messy other works elaborate and detailed. The King crushed all.

That's a bit of background, someone should write a book on the dude... Almost everybody's got an opinion on the Nost piece on Smith St. Some hate it and others really hate it, and a small minority love it. You decide!

The black-clash against Nost in this particular case comes mainly from the artists that originally painted the wall back in 1986 and general supporters. I can appreciate and understand the time and effort of Eve Glenn and Megan Evans. No doubt it was a very progressive piece of artwork of its time. I to believe that we should have equal rights for females and males. I think misogyny plays a negative part of the graffiti culture, evident in the sexual objectification of women by practitioners such as Lush. But the mural itself was outdated, faded and bland. These photos below shows a comparison before and after the big Nost piece. A lot of the mural was painted with graffiti already. I like watching the dialogue that has it has ignited, the streets are, once again alive. 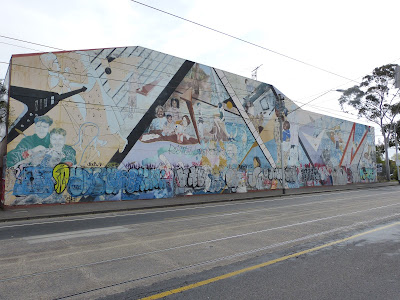 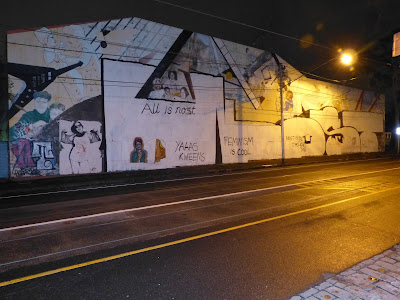 The wall back in 2007 with almost no graffiti a stark difference. Cultural attitudes changed later on in this period and the wall was bombed with throw-ups. 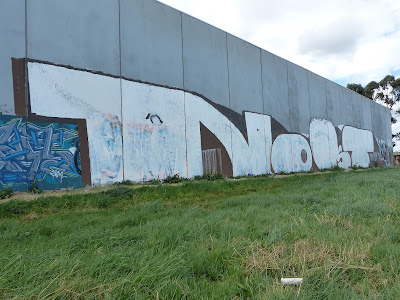 Posted by Australia Graffiti at 20:04