In the last 5 or so years there has been a distinct rise in graffiti along highways and freeways particularly around Melbourne. Most track side train walls are taken and now writers are pushing further and further to new places. Nost and Pork are pioneering new spots regularly. This sets a precedent for other writers to put up in what was a socially unacceptable place.

Yucks destroyed the Monash Fwy several years ago by painting repetitive throw-ups claiming several kilometres of wall space. As soon as someone capped one of his throw-ups he capped it back leaving a staunch message of territorial control. Yucks throw-ups have since been buffed. But he leaves a pioneering legacy. 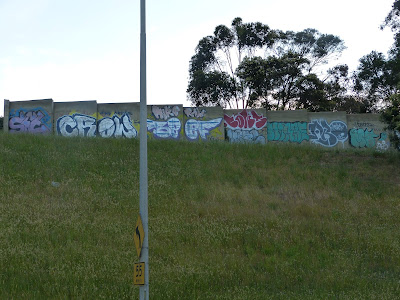 rare sight to see double story pieces on the roadside 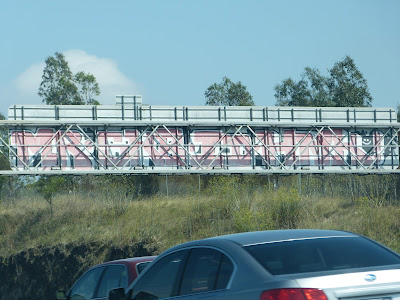 One of the older, more faded and now buffed artworks

Posted by Australia Graffiti at 17:32