Graffiti is part of Melbourne culture just like trams or sport. Graffiti is spread throughout Melbourne. The epicenter of the scene is in the Inner-Northern Suburbs of Fitzroy, Collingwood, Brunswick and Clifton Hill. These suburbs have embraced urban art. They haven't fully accepted graffiti in its entirety. However its more recognized, and noticed than any other suburb. The photo shows the transition of graffiti from public spaces into private yards. 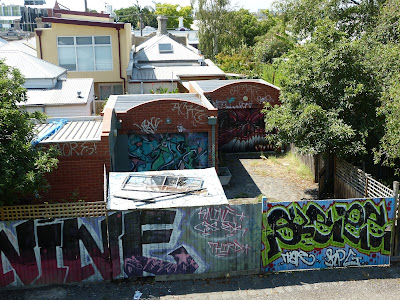 http://www.abc.net.au/tv/dreambuild/episodes/ep15_s2.htm
A short documentary on how graffiti was incorporated with architecture in Fitzroy

Posted by Australia Graffiti at 19:41