Most Southern Street Art in Australia

50 minutes South of Tasmania's capital is a little town called Geeveston. Driving from Hobart you be welcomed by street art covering what would otherwise be plain steel objects. Here they are brought to life by artists like Odius and Seven (from IKOE crew, Incredible Knights of Enamel https://www.facebook.com/theikoecrew/).
This is a great example of how street art can improve the local amenity. Surprisingly progressive work in what is a traditionally conservative town built on logging.

From the late 1800's to now forestry has been a significant part of the town. More recently from 1962-1988 the major employer was the APM mill. In 1988 the mill closed with mounting debt. Geeveston became a ghost town during the 1990's and lost almost a whole young working generation. The town began a revitalization program spear-headed by locals.

In 2001 than premier Paul Lennon (see photo below) counteracted "the lack of jobs" by opening a 4.5 million dollar Tahune Airwalk. This was a step away from traditional source of income forestry, however ironically the company running it was and still is the controversial state owned Forestry Tasmania (responsible authority for earmarking forests for logging). In 1997 a Regional Forest Agreement between the state and federal government enabled a Victorian company to invest in Southwood timber mill. Now owned by Malaysian Timber company Ta Ann (to see more information about the company visit https://taann.wordpress.com/).

Tasmanian Premier Paul Lennon (from 2004-2008) wanted forestry, conservation and tourism to co-exist. Forestry in Tasmania has regularly received priority over conservation due to perceived short term benefits like employment. The nature of the industry is unsustainable and detrimental to the ecological integrity of Tasmanian landscapes.
Source-http://www.abc.net.au/landline/content/2004/s1181101.htm

Street Art projects like this one are essential for small regional towns to keep moving and adapting away from an unsustainable forestry industry. The regional community in Benella, Victoria has seen the potential benefits from Street Art and now holds an Annual Festival celebrating aerosol art. http://www.benallastreetart.com.au/ 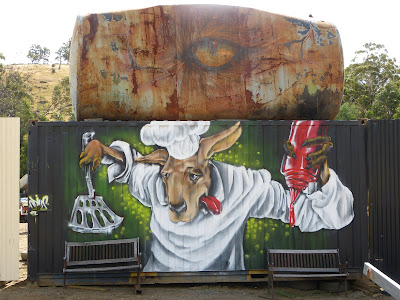 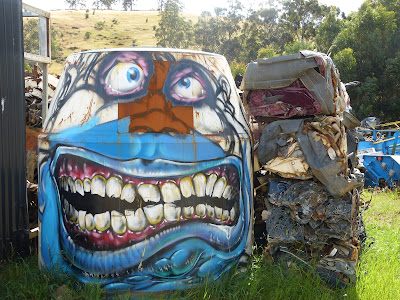 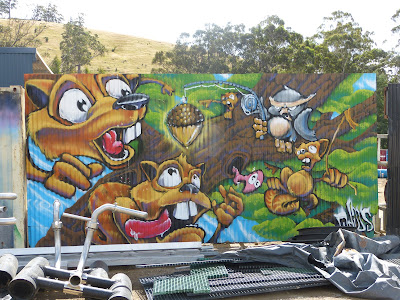 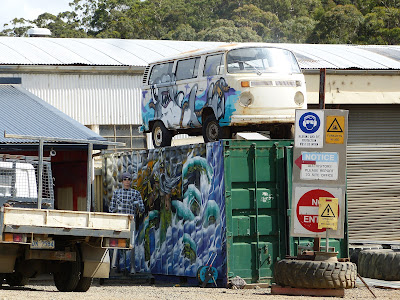 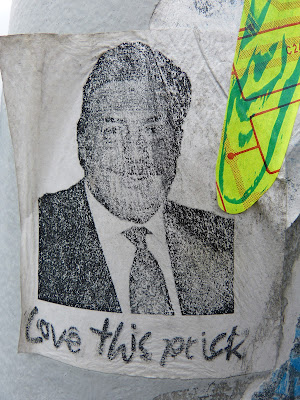 '
Political Satire in Hobart of former Tasmanian Premier. For more info on Paul Lennon and allegations of corruption follow the link..
http://www.tasmaniantimes.com.au/index.php/article/lennon-the-claims-a-wrap

Posted by Australia Graffiti at 18:53